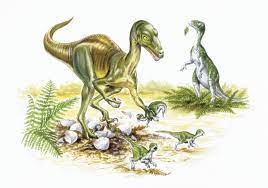 Troodon is a genus of troodontid dinosaur, a group of carnivorous dinosaurs within the family Troodontidae. It contains one species, Troodon formosus, named by Othniel Charles Marsh in 1879. Its fossils are found in North America, specifically Montana.

The name “Troodon” derives from “Tro”, Greek for “claw” and “Odon”, Greek for “tooth”. This refers to the clawed hand of the animal. The specific name, “formosus”, means “beautiful” in Latin.

The first troodontid teeth discovered were found in Mongolia in 1902 during the American Museum of Natural History expedition led by Barnum Brown. A few months later, the same team recovered several additional specimens from Gobi Desert in China. These discoveries prompted paleontologist Charles H. Sternberg to describe the material as Troodon giganteus. In 1905, he published his findings in a short paper entitled “On a New Genus and Species of Dinosaurian Reptiles”. He named the species Troodon giganteus based on the size of the specimen, which measured about three feet long.

In 1908, Albert Koch described the type specimen of Troodon formosus from the Gondwanaland fossil beds near Wadi Faynan, Egypt. However, it wasn’t until 1923 that Friedrich von Huene formally established a new genus and species Troodon rex for the Egyptian fossils. This name was chosen because the animal resembled a king.

Troodon is one of the earliest genera known to include both small and large forms. Its members are characterized by a single pair of crests on the skull roof, a feature shared with some early birds. The crest of Troodon is composed of bony plates that overlie each other like tiles laid atop one another.

The first specimen assigned to Troodon that was not a tooth was discovered by Sternberg in the Dinosaur Park Formation in Alberta in 1931. He gave it the name Stenonychosaurus and published his description in 1932. This taxon was later reclassified into its own genus, Troodon, by Ostrom in 1968, although he did not designate a type species. In 1970, Russell named S. inequalis, describing a nearly complete skeleton recovered in the same formation as Stenonychosaurus.

In 1981, Gregory Paul suggested that Stenonychosaurus might be synonymous with Troodon, and thus renamed the latter to avoid confusion. However, in 1983, David B. Norman argued that Stenonychosauridae was distinct enough to warrant recognition as a separate family. Subsequently, several authors have used the name Stenonychoerus for Stenonychosaurus, although the specific epithet is invalid because it refers to the generic name rather than the species.

A second troodontid, Dromaeosaurus albertensis, was described in 1984 by Michael J. Ryan and Peter M. Galton, based on material from the Dinosaur Park Formation. They erected a new subfamily, Dromaeosaurinae, within the Troodontidae, and placed D. albertensis in it. Other researchers have questioned whether D. albertensis belongs within Troodontidae, however, since it lacks many features associated with troodontids.

Troodon itself was initially classified as a troodontid, but in 1985, Robert L. Carroll designated it as a member of Ornithomimidae due to differences in the skull bones. Several studies have suggested that Troodon is actually closer to oviraptors than to troodontids.

In 1996, Carroll proposed that Troodon was closely related to the dromaeosaurs Dromaeosaurus and Velocisaurus, and therefore moved them out of Troodontidae and into Dromaeosauridae. This hypothesis was supported by subsequent phylogenetic analyses, including those conducted by Matthew Baron et al., Phil Currie and John R. Horner, and Mark Norell and colleagues.

However, in 2003, Carroll revised his classification again, placing Troodon within Troodontidae once more. Later papers have supported this arrangement.

Several hypotheses have been put forward regarding the relationships among troodontids, dromaeosaurs, oviraptors, and birds. The most widely accepted view is that troodontids are basal members of the group, while dromaeosaurs and oviraptors form a clade called Deinonychia. Within this grouping, the relationship between Troodon and Dromaeosaurus is uncertain; according to one analysis, they are sister groups, while another suggests they are close relatives.

Dissolution of the one species model

The concept that all Late Cenozoic troodontids are members of one single species, Troodon formosus, began to be questioned soon afterwards.

Currie (1987), for example, suggested that the Judith River assemblage represented a distinct taxon, Troodon equestris, based on differences in size, tooth morphology, and cranial ornamentation compared to those found in the earlier deposits. He further suggested that the Lance formation material represented another troodontid taxon, Troodon bakkerorum. This hypothesis was subsequently supported by subsequent authors, although some disagree.

In 1990, Currie and colleagues concluded that the Judith River troodons were indeed Troodon formosus, but also recognized that there was little evidence to support assigning the Lance formation material to the same species. They proposed that the Lance formation material belonged to either a second species of Troodon or a third taxon, Pectinodon backeri, noting that both forms differed considerably from the Judith River material.

Zanno et al. (2011) noted that the Judith River material does differ substantially from the Lance formation material, and that many of the features used by Currie and colleagues (e.g., the presence of a prominent crest along the midline of the maxilla) are present in the Lance formation material. They therefore argued that the latter belongs to a fourth troodontid taxa, Troodon inequalis.

They did note, however, that the Judith River material differs from the Lance formation material in having smaller teeth and a shorter rostrum. They suggested that the former represents a juvenile individual of Troodon formosus and that the latter represents a mature adult.

Troodon is classified among troodontid dinosaurs based upon a number of characteristics. In particular, it shares many features with the genus Zanabazar, including similar proportions of skull length relative to total body size, a short neck, and relatively long forelimbs. However, Troodon differs from Zanabazar in having a shorter tail, longer hind limbs, a flatter face, and a larger braincase. As such, Troodon is considered to represent the earliest stage in the evolution of troodontids, representing a transitional form between primitive troodontids like Sinornithoides and more derived forms like Zanabazar.

The phylogenetic analysis conducted by Zanno et el. in 2011 supports this classification, placing Troodon within Troodontinae as sister taxon to Zanabazar. This relationship is supported by several shared anatomical traits including a robustly built skull roof, a large temporal opening, and a small parietal fenestra. A study published in 2012 found evidence that Troodon lived alongside another troodontid species called Saurornithoides, suggesting that both genera evolved around the same time.

In 2011, paleoanthropologist Philip Gingerich published a paper describing a collection of fossilized teeth found in the late Cretaceous period in northern Alaska. He named the species Troodon formosus, meaning “beautiful tooth,” and referred to it as a troodontid dinosaur because of its unique combination of features. This specimen was the largest known troodontid, being about four times heavier than the next biggest one.

A few months later, paleontologists David Varricchio and Mark Loewen discovered a similar set of fossils in northeastern China. They named it Sinornithoides milleni, which translates to “millennium bird.” Like T. formosus, S. milleni was a troodontid, although smaller than T. formosus. Both specimens were found in deposits dating to the early part of the Cretaceous Period, making them some of the oldest known troodontids. Together, the specimens represent three different species of troodontids that lived during the same time period.

The discovery of these two species led Gingerich to propose that troodontids originated in Asia and migrated into North America, where they diversified into several different kinds of animals. His theory was supported by the fact that both T. formosus and S. milleni were found in areas near each other, suggesting that they might have coexisted for a long time. However, the Chinese specimen was much younger than the American one, indicating that there must have been periods of time when the two continents were separated.

Gingerich suggested that the presence of troodontids in North America could have helped make the continent habitable for dinosaurs and possibly humans. He pointed out that the evolutionary changes that occurred in birds, such as the development of feathers, happened very slowly over millions of years. Therefore, he argued that the appearance of troodontids, which possessed many characteristics of birds, could have given rise to feathers in dinosaurs. He also believed that the evolution of feathers enabled dinosaurs to fly, which allowed them to spread across the land.